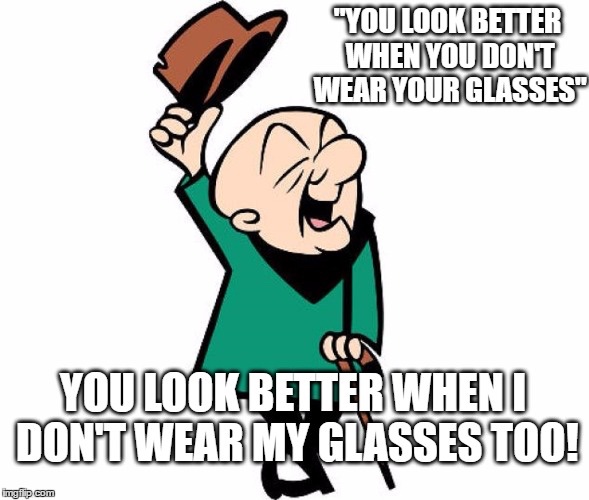 Some of you may remember I ended up in the ER a week after I came back from Ireland with a weeklong headache and double vision. I was sent to see an opthamologist after that who sent me to an ophthalmic neurologist. I saw her last week.

They dilated my eyes again but with all the snow, driving home from Rochester was agonizing. Even with sunglasses on.

So after being there for three and a half hours and a battery of tests and measurements, it turns out I have several problems which may or may not have one cause but possibly more.

I have thinning of the retina – her face when I commented you mean I have anorexic eyeballs?! was funny! Poor lady, she didn’t know what to make of me. At least she found it funny!

My eyes are seated too deeply and they’ve dropped in their sockets. I’ve been saying that I thought my eyes looked sunken for the last three years or so. I was right. They need to find out why.

My eyes are also uneven, the muscles holding them are droopy. There aren’t many women who can say their balls have dropped. That’s an affliction more usually associated with the chromosomally challenged members of society! Yes, you can bet your sweet kazoo I’ll be telling people I have saggy balls!

My eyes refract at significantly different rates. I also have problems holding focus and focusing in the first place. The harder I look the less I see.

She did comment that she was surprised I wasn’t taking more headache meds. I kind of always have a low level headache, I don’t take pills until I get ‘spikes’ that are too bad to manage. Then there’s migraines too so it’s all fun in my noggin.

So now I have to have both an MRI and an MRA. They need to check for tumors, clots and aneurysms.

She said she also wants me tested for Myasthenia Gravis. The MRI and MRA are both going to be under sedation because apparently they’re going to take 3-4 hours to complete. The idea of coping with that is upsetting me more than potential diagnosis. The machines  terrify me. I’m also crap with sedation and had a bad reaction to the contrast dye last time I had a CT scan so the whole thing is just flipping wonderful. I thought they might do an MRI but the rest was a rude surprise. She said the vision problems I’m having can be corrected with a combination of surgery and prismatic lenses dependant on what the underlying cause is.

I have to wait until next month for the scans because they have to schedule a time with an mri tech, an anaesthetist and the neurologist to all be present – what a palaver. The headache neurologist is up next and she’s writing to them to coordinate an attack as it were. Hopefully all this will be sorted soon! I have to continue with eye drops 4 times a day and eye patches to try and strengthen the muscles. So that’s it for now, the neuro said she’d send me a copy of her report but big words are scary so I probably will ignore it!