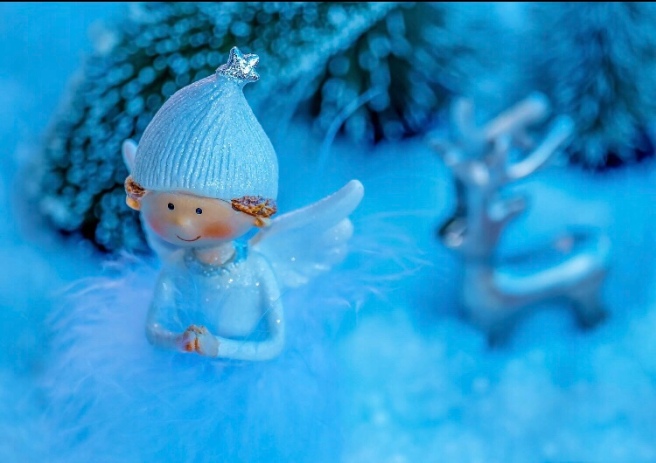 I was tagged by Sadje to follow the story. My part is the last.

1. Copy the story as it appears when you receive it (and the rules please)

2. Add somehow to the story in which ever style and length you choose

4. Tag only 1 person to continue the story

Harriet loved the Christmas season. Everything went up Thanksgiving evening and didn’t come down until New Year’s Eve. People could see her Christmas tree from the other end of the block.

This year, Harriet’s theme was the snow angel. Her tree was flocked with white, glistening snow and decorated with cherubs and angels of all shapes, sizes, and colors. Tiny angels surrounded snowmen on the mantle and Santa even had a young angel girl riding in the sleigh with him, while Mrs. Claus entertained a Snow Angel Brownie troop back at the North Pole.

Her house was filled with Christmas music and everywhere she looked, there was joy. Everywhere except in her heart. No one knew how lonely Harriet was and how much she longed for company. Oh, neighbors would stop at the door when caroling and families would wave as they walked past, but none came to visit.

Two weeks before Christmas a snowstorm struck the town and left behind nearly a foot of snow. Mr. Chen and Mr. Howard were kind enough to snowplow the neighborhood’s sidewalk. They salted the main walk and all the way up to Harriet’s door.

“Thank you, gentlemen,” she said as they tossed a final handful of salt on her porch. “Would you like to come in for hot chocolate?”

The two men smiled and made their apologies for not having time, and went on their way. Harriet understood, but was saddened just the same. She closed her front door and went into the kitchen to pour herself a cup. While looking out the back window, she gasped.

“Well, I wonder who made that,” she said. “It’s a perfect snow angel.”

She looked around for footprints, but there were none. Just a perfect little angel in the snow.

Tale from the mind of Kristian’s part;

Then as she stood there in her pink woollen cardigan, with her slippers slowly getting wet from the melting snow, Harriet, gazed up and saw something amazing, something magical.

As Angel hovered in the sky, just by her old Oak tree, flapping its white’s wings. He was a male angel, who looked quite old and had a lopsided golden halo over his bald head.

“Oh, Excuse me. I do apologise for making an impression in the snow. I’ve not had these wings for very long and I jumped out of your tree, but didn’t get the hang of them in time, so I landed face down in your garden. I am sorry. I’m just so clumsy, I fumble all the time.”

“My Names Clarence. What’s yours?” he flew down towards her and held out his hand then awkwardly nearly knocked her over.

“I’m Harriet,” she said as she shook his hand. It was warm and he had a nice friendly smile, so she decided to be hospitable. “Would you like to come in for a cup of tea?” she offered.

“Well, that’s very kind of you. Yes, I would, very much. I haven’t had a good cup of tea in simply ages.”

As she put the kettle on, she heard banging coming from the living room. He certainly was a very clumsy Angel.

Clarence had knocked over her easel and there was paint all over the floor. He picked up her latest picture, it was a painting of the local park, with the ducks on the pond and some children playing with a toy boat.

“Did you paint this?” Clarence asked.

“Yes, yes I did. Do you like it?” Harriet was so pleased. She had learned to paint at college and had always enjoyed it, but no one had ever come in for long enough for her to show her paintings to. They were mostly of the local area, they usually had children in them.

“I think it is a masterpiece,” Clarence said, “I think you need to share this with other people. In fact, I’ve made up my mind, I am going to……”

“Plan an exhibition of your paintings. We will get the local art gallery to arrange it and all the town people will see it. They will realize how talented you are”

Harriet was very flattered by the praise from Clarence. But she didn’t think that she could afford the cost of holding the exhibition. And who would she invite? She had no friends in the area. Clarence overruled all her objections and assured her that every thing will be taken care of.

He departed after have a cup of tea in Harriet’s kitchen. They had a lovely chat over tea, with Harriet sharing a lot of her feelings of loneliness and isolation with the angle.

The next day, there was a knock on her door. She had been busy with cleaning up the mess made by Clarence yesterday. She wasn’t expecting anyone and was surprised at the knock. When she opened the door, a middle-aged man was at her doorstep. ” Are you Harriet” he asked. When she told that she was, he asked her about her paintings. ” What do you want to know?” She asked. She still hadn’t connected this visit with the occurrence of yesterday. ” I am Roberts, from the art gallery at the city center. You were referred to us by one of our clients ” he said. ” I wanted to see how many paintings you want exhibited and which date is convenient for you. We have a surprise open slot for this coming Saturday” Harriet was feeling quite overwhelmed by all this but she took her visitor inside and showed him her paintings. They were all in her den, laying haphazardly on every available space. Mr Roberts was…

..looking around for a place to start. He worked his way slowly from left to right. He cleared his throat a few times and raised his glasses to look closer. Poor Harriet was getting quite worried. “He must be trying to think of something polite to say” she thought. “He must hate them.”

Eventually Mr Roberts stood straight and pushed his glasses further up his nose. They’d slid down slightly whilst he was scrutinizing her work. “Remarkable young lady. You have quite the talent” Your work would add quite a cachet to our show. I do hope you will allow us to feature you.

Harriet agreed and the rest of the day and the whole following day was a blur of cataloguing and crating her work for travel.

Saturday dawned with a crisp sparkling clarity. Hannah dressed in a scarlet dress in keeping with the season. She thought she might feel less nervous if she looked festive and cheery.

She made her way to the gallery, a thousand butterflies quivering in her tummy. She had never felt so nervous before! What if no one liked her pictures. She was regretting allowing them to be shared already.

She was ready to turn around and slope off home when who should appear but Clarence. Golly that angel was clumsy! He had more cuts and scrapes than anyone would ever believe an angel could have!

“Where do you think you’re going young lady?” He asked “The gallery’s that way!”

“Oh Clarence” Harriet sighed. “I can’t face it. No one will like them, they’re very silly”

“What rot” exclaimed Clarence. “Seeing your paintings today will change someone’s life” Harriet laughed. “Oh be real Clarence, they’re only paper. They can’t change a life” Clarence was about to reply but he managed to step off the kerb and fall over the two old dustbins set there. What a kerfuffle! He blinked out of sight in shock and Harriet ran backwards towards the gallery before she got into trouble.

She arrived to a party in full swing and sidled in furtively. She tried to blend in with the crowd and find an obscure place to camouflage herself but it was too late, Mr Roberts had seen her.

“Harriet my dear, please come with me, there’s someone longing to meet you” He took her arm and gently led her over to a clearing by the painting of children playing in the fountains in the park. They were a spot of sunshiney fun on this crisp wintry day and part of a series Harriet had sketched through the early part of the summer season. She’d had such fun watching those children in the park.

Mr Roberts stopped in front of a woman with the saddest smile Harriet had ever seen. Her heart went out to this lady who looked overwhelmed with sorrow. She just didn’t know what to say.

The lady smiled and said “Thank you so much for these wonderful paintings. When I woke this morning I didn’t want to live. My daughter died two months ago and I can’t bear being without her. My sister in law had already planned to bring me here today but I was going to go home and swallow all the meds I’ve been saving so I could be with my daughter. See that little girl in the red dress? That’s Lucy. She was so happy and full of fun before she got sick and oh how she loved the park! I feel like I have her back. She would want me to be happy and seeing these pictures gives me courage. Thank you my dear”

Harriet was humbled. She hadn’t felt her paintings were special but meeting Lucy’s mum showed her just how important life is and to cherish both life and your talents as you never know how you can help others.

She felt a whoosh and a slight draft beside her.

“See” nudged Clarence. “I told you that you would make a life changing difference.” He was so happy he elbowed the angel next to him on first harp. He toppled into the next angel and they went down like dominoes.

The Heavenly Host fell down the stairs and collapsed in a pile of harps and sleigh bells. Harriet smiles and remembered the old saying, ‘Every time a bell rings another angel gets its wings’ – but this angel, Clarence was getting a crash helmet and knee pads too!