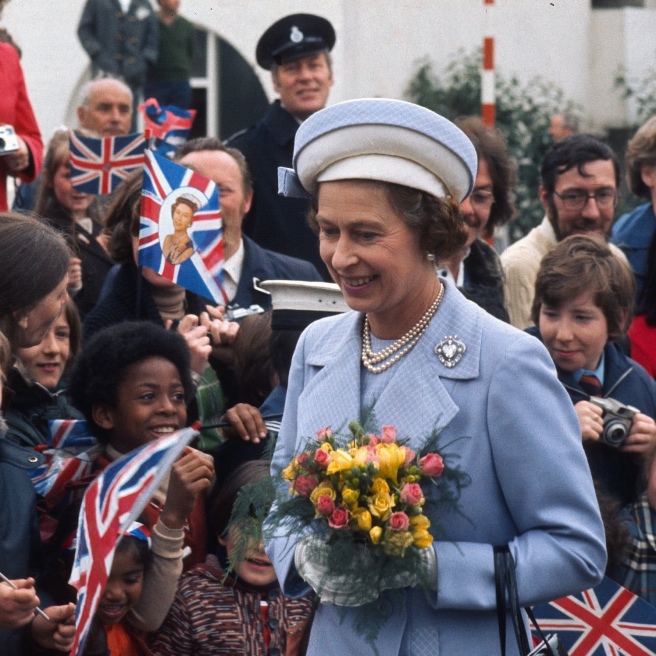 1977. The Queens Silver Jubilee. 25 years as Queen of England and it was a big deal! My Mother, although Irish, was a staunch Royalist. She absolutely adored the Royal Family and in particular, Princess Anne. She loved her sense of style and often bought similar outfits.

We had a house just behind Buckingham Palace in London. A typical Georgian London home with railings in the front, taller than it was wide with a basement and a pocket sized garden and patio at the back. Those railings, usually black, were painted silver by my Mum for the jubilee – much to the consternation of our snooty neighbours! She swathed the house in bunting and proceeded to knock on every door to organise a street party to celebrate. Every street in England seemed to be having a street party. For us kids, it was just glorious! Everywhere there was excitement. Special assemblies and picnics at school. Commemorative coins and daffodil bulbs to grow. Coloring books, special tv shows, parades and fun fairs and to top it off, the knickerbocker glory of nostalgia – The Street Party. That’s how I remember it. With as much planning, anticipation and new clothes as a wedding. Some families bought grocery carts of fizzy pop for the kids. Others made sandwiches and sausage rolls. There were the quintessential cheese and onion or pineapple on stick ‘hedgehogs’* There was jelly and choc ices. Iced cakes with sprinkles, crisps and those funny little wafer ‘footballs’ filled with something that smelled vaguely cheesey but resembled putty. Oh how we loved those slightly stale-tasting, musty smelling treats!

There were games as always. Slightly changed up for the day that was in it. We had Musical Thrones, Pin the Crown on the Queen and Pass the Corgi – although the creativity had failed at that point. It really WAS just a parcel.

My Mum had one of those reel to reel cassette(?) players. I’m not sure quite what to call it but she was blasting music. Grown ups were drinking decidedly Not Pop and there was an atmosphere of sheer exhilaration. It was a wonderful day. My Mum, ever the party planner had arranged a surprise none of us knew about. She’s hired a costume and the tallest of our neighbors dressed up as Orinoco from the Wombles and he appeared just as we were all singing ‘Remember you’re a Womble’!! Oh the excitement!

Later that evening my Dad and I walked around to the front of Buckingham Palace to watch fireworks. I’ve never seen such a glorious display as we had that night. It was magnificent. A gruff old man elbowed me, and with a twinkle in his eye exclaimed “It’s as loud as the Battle of Britain!” He was wearing a rack of medals on his suit. I’ve never forgotten him. A stranger who just shared a moment of joy. 43 years ago. Nearly my whole lifetime. The whole crowd burst into ‘God Save The Queen’ and I remember wishing that feeling would never end. I got my wish really. Here I am, still feeling it today.

We took so many photos that day and only two remain. They’re very poignant as they’re also the only two photos I have of my mum.   She was so animated and happy, it’s bittersweet to see her young and lively when she’s no longer with us. Losing an old woman with Alzheimer’s was hard but seeing her back when she’d chase me down the street with a plastic spider and acknowledging that loss.. it’s like being stabbed. My mum. The only person I know who would stand drinking ginger ale out of a Waterford Crystal goblet at a street party! 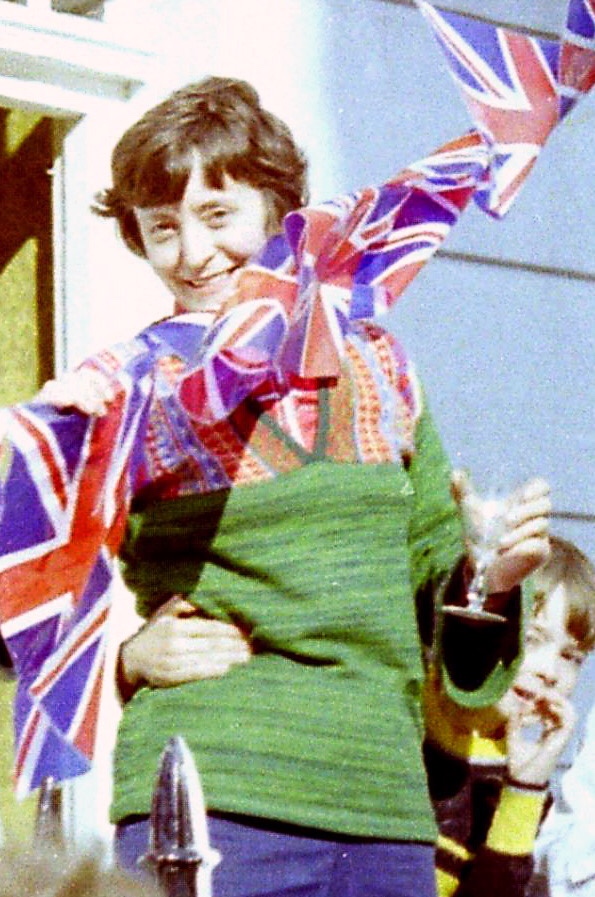 *a potato covered in foil with a load of cocktail sticks adored with cubes of cheese and silver skin onions or cubes of pineapple.

50 thoughts on “The Street Party”