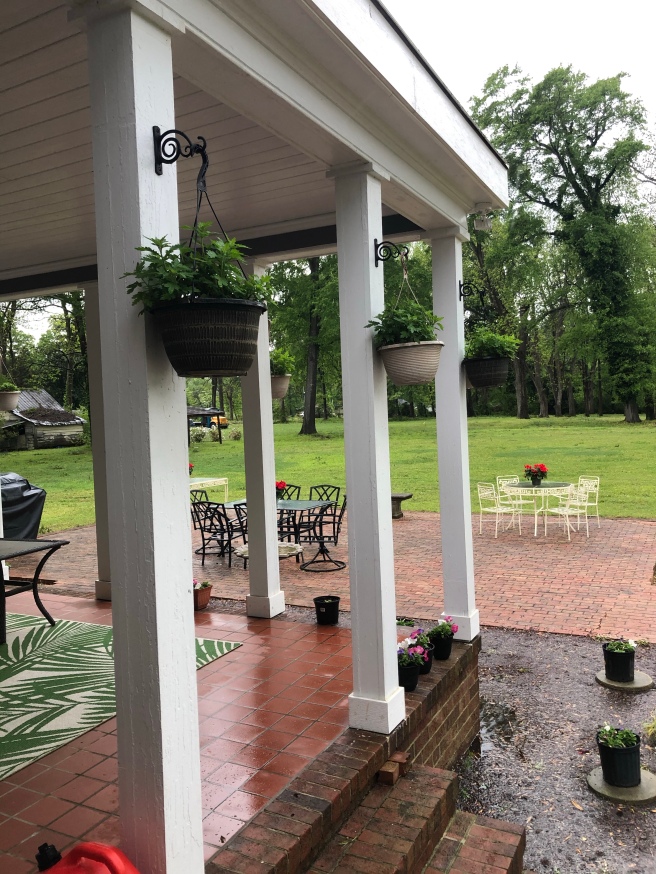 It’s absolutely pissing down here. I’m starting to think I should build an ark from all the branches that fell Monday. We had horrific high winds and tornado warnings. A couple of 200 year old oaks fell and took out the power as their swan song. They weren’t on my property but I’m sad they’re treeceased.

My garden is a swamp. When it warms up again it’s going to be the mosquito breeding ground of North East North Carolina.

My two dogs are total Princesses. Even the male one. They took one look at the weather and splayed their legs refusing to go out. They are mutinying. They’ll be chucking breadfruit trees off the porch soon in the style of Mutiny on the Bounty. If they could open the dog food cupboard I’d be a goner.

I managed to get the fat farting beagle to at least pee before he headed back to the porch faster than I can move. Giving me the death glares that indicate a fatwa on my slippers or worse.

He really doesn’t need to be avenged. The scent of wet dog is quite bad enough. Malodorous spiteful beast!

It’s funny how smells are like an odiferous time machine. The smell of wet dog took me straight back to my grandmas kitchen in Ireland. She had a big old turf range and in this one memory, Grandad had come in with an orphaned lamb. A common occurrence at this time of year. He was soaked through from dealing with the dead ewe and smelled of wet tweed. The lamb was bleating and Grandma was readying a bottle of milk for it. Queenie, the sheep dog was soaked and of all the smells in the kitchen that morning, wet dog is the one that took me back. I’m sat there right now, feeding that lamb the bottle while Grandad was saying he’d make a farmer of me yet. I miss them all so but my evil wet mutt gave them back to me for just a minute

Scents do that. Lavender. My English grandma had two huge lavender bushes either side of her front gate. She lived right on the Kent coast so the smell of lavender was always interspersed with salty air.

Whilst in Dingle last year I had two scoops of ice cream. One was a very floral lavender and the other was a sea salt vanilla. Before I’d even taken my first lick, I was opening Grandmas gate in my minds eye and running up the path. Memories can be delicious.

Vick’s vapor rub reminds me of boarding school. We used to rub it under our eyes so we could pretend to be crying and homesick so the nuns would give us hot chocolate.

Lily of the Valley reminds me of Christmas. My Mum loved it and I’d save up my pocket money to buy her a bottle of Yardley perfume.

There’s such a strong connection between scents and memories. Some are good, some are terrible. One of these days someone is going to invent a perfume and call it Deja Vu and I for one will understand exactly why

Picture: From my back door this morning

This post was written in response to the Discover Prompt: Scent