When Fartichoke was a little lad we’d go to visit his dads mum. She was one of those that liked blue toilet water. Yeah. THEM! She’d have those plastic thingies that hang over rims of toilets under the seat and turn the water blue when you flush. Personally, I thought the lads aiming at them was the reason for the skanky carpet in the bathroom but… what-do-I-know?!

Well apparently, every time we’d been over to visit, the loo would back up and they’d find one of these bloo loo things down there clogging it.

We were there one day and she caught Fartichoke in the act of removing it and putting it down the loo and flushing.

He was about 3 at the time so only a little kid but she was screaming at him and flapping her arms like a demented seagull and he was terrified, crying his eyes out.

I was fuming so I grabbed him and took him outside into the garden. We sat down on the grass together and I asked him why he did it.

With brimming big blue eyes he sniffed, wiped his nose on his sleeve and said “To stop the aliens coming up the toilet and biting my bum”!! 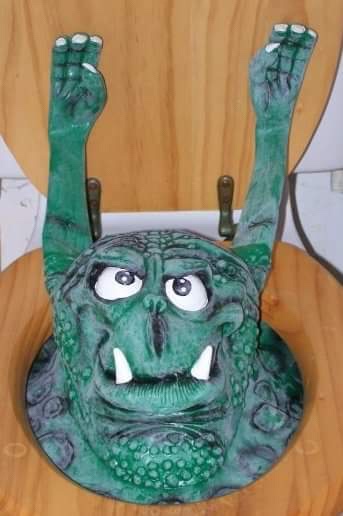 15 thoughts on “Fartichoke, The Thunder Box and The Aliens From Uranus.”