Lana from Welcome To Our Campfire asked about Christmas trees and my answer would have been too long for her poor comments box!

We have a fake tree because I have a weird allergy to real ones. My hands and face swell up if I touch them and it’s painful. The bizarre thing is that last year I got the hands swelling thing from the fake tree. I think it’s because I put so many lights on it that I was dressing it too long.

I was a bit like Clark Griswold. I had 800 lights on a six foot tree. ‘im indoors thinks there was 400 and he was tutting because I went so overboard with four hundred…

We have a history of Christmas tree disasters. I always had an artificial tree in England. I had a fantastic one that looked so real, people swore I was lying! I loved that tree but I didn’t bring it over here. I didn’t bring anything much, it was just too expensive. 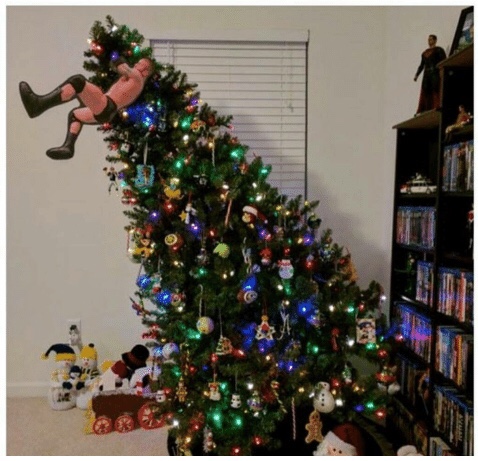 Our first Christmas here we did the whole ‘going to cut a tree’ malarkey. Well, ‘im indoors and the kids did. I was sick so I stayed home. Princess PITA wore glittery ballet style flats in spite of being told to wear her wellies and naturally lost one as mud slurped it off her foot. They all came home, mud up to the arm pits, absolute filthy. Thankfully only one shoe was lost although Fartichoke got sucked out of his wellies too. That’s probably the only time I’ll ever say it would have been better if it was colder!

Our house was an older Victorian and it had 11 foot ceilings. The tree was too big both in height and width. We ended up having to saw all the branches off one side and about two feet off the bottom. It ‘didn’t look that big in the field’ apparently! A couple of hours later once the tree had been in the house and warmed up, it started giving us presents. Literally hundreds of little spiders were running out of it. It was like arachnophobia and the scream combined. I think I should have got a medal for both my screaming and profanity. The pitch was glass shatteringly perfect and who knew I could hold a note that long? My nightmares for the next couple of weeks had ‘im indoors wearing ear defenders to bed!

Anyway, the tree was removed tout de suite and a fake one was purchased!

This was fine until a couple of years ago when optimism won over experience and we had a real one again just because ‘im indoors really wanted one.

Against my better judgement we bought one ready cut and I tried decorating it with long sleeves and two pairs of latex gloves.. it just made my poor little hands look like sausages!! We decided to leave it half decorated and I’d finish it the next day. Later that evening we were sitting watching the telly when ‘I’m indoors said ‘what’s that noise?’ I immediately started sniffing thinking the dog had farted but nope, there was rustling!

A quick headcount told me there were no cats in the tree. All three of them were looking through the glass doors. I had shut them all out in the kitchen because George wouldn’t stay out of the bloody tree. ‘im indoors got closer and shook a branch – and out flew a bloody bat! Well the house went wild. He ran into the kitchen and the cats FLEW in and started trying to chase the bat. The tree went flying, pictures were knocked over, the cats were shredding the curtains climbing them. It was a war zone! ‘im indoors was yelling at me to get out of the way and he was trying to swat at the bat. I opened a window trying to get him to chase it out but in all the commotion, he got bit by the bat. I think the bat must have flown out the window because we never found it. I got the cats out under great protest and looked at his hand. It was ugly so off we went to the ER. There we found out that he’d have to have a course of rabies injections since they couldn’t test the bat for rabies. Those injections are extremely painful apparently so I felt very sorry for him.

Unbelievably he’s making noises about having a real tree again this year! The next tree I buy will be a pre-lit bugger – I’m done with Christmas tree disasters! 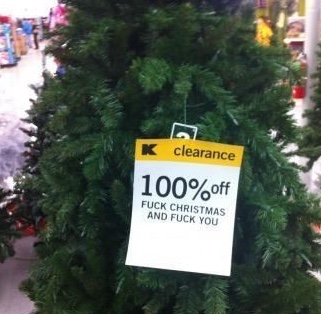