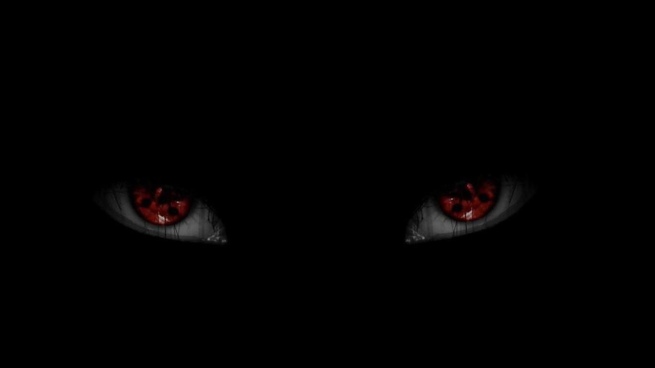 When I was still married to Farquhar Bastardcelot we lived in a house by the sea. It had three bedrooms. Princess PITA had one, Fartichoke had another and FB had the biggest. Our marriage was a war zone and I used to sleep on the couch.

Princess PITA would never go into FB’s room, I didn’t either mind you but she point blank refused to go in saying “The red eyed man” would get her. Whenever we used to go out she would look up at FB’s bedroom window and say the red eyed man was watching us. I thought it was just a kid thing to be honest. She was 2 at the time.

I looked up and there was FB standing in the kitchen doorway, face contorted, he was livid. He was moving his mouth like he was chewing his own teeth and his eyes appeared to be glowing red in the light, the fury seemed to be coming off him in waves and I felt sure he was going to kill me. Even now, I feel cold writing this.

I knew my only chance was to get up the stairs and run past his room and lock myself in the bathroom. The only room in the house with a bolt on the door. I tipped a chair over to try and delay him. I needed every second I could get if I was going to survive and made a run for it, out into the hallway and up the stairs like the hounds of hell were after me. I couldn’t breathe I was so frightened and I could feel my heart pumping in my throat.

As I ran past his room I glanced in – and he was lying in bed asleep.

There wasn’t anyone behind me.

All I could hear was the blood pumping in my ears. The taste of Adrenalin in my mouth and that absolutely horrific fear I was wrong and I was about to die.

I can’t tell you how shocked I felt and how unsettled. I was still terrified, I know he was downstairs, I saw him. I thought I was going to die at his hands.

Did I see a ghost? Was it an embodiment of his anger? Were what Princess PITA saw and what I saw one and the same?