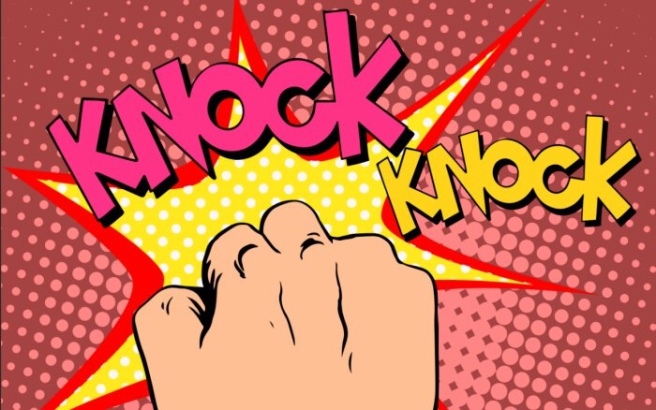 So far since living in the US I haven’t had any truck with the Joeys*. Maybe it’s because we lived in the middle of a largely Amish community when I first moved here. There’s no explanation why we’re escaping their visits now though, unless either my reputation proceeds me or they aren’t as tenuous here as in the UK.

When I lived in Tunbridge Wells shortly after the birth of Princess PITA they were a pain in the bum. They travelled in packs so if you didn’t answer the door to the first lot, the second would knock and so on. It was relentless.

Anyone who’s had a newborn knows how precious that time when they’re asleep is and, how you will happily pulverise anyone who disturbs them. I had a sign on my door saying “Baby asleep, knock and face the wrath of a tired Mother” – and they still knocked!!

I ended up answering the door with a hammer and threatening to meld their brains with the brickwork one day and ten minutes later – they knocked again!

So fast forward about fifteen years, I was staying with Titselina Bumsqueak as she’d just had an operation and needed some help. She also had a ten week old baby and a two year old so she was a flippin’ grumpy cow!

We were sat having a cup of tea when we saw a mini bus of Joeys unloading up the road. Leaving out the swear words, she said… well nothing really. She was inferring she didn’t want to converse with them anyhow! I said it’s okay, I’ll go to the door so we sat and waited for “the knock”

Sure enough, it came so I answered the door to a seedy, jaundiced looking chap with greased back hair and Harry Potters Aunt. A large lady in a frilly floral blouse with a cameo brooch, three chins, 2 warts and a blue rinsed beehive. Their conversation is in italics.

“Good afternoon, Do you love our Lord?”

I was faking a dreadful cockney accent. Let it be said, I’m diabolical at accents. I can’t even sound the slightest bit American to my lasting disgust.

They looked a bit taken aback but ploughed on regardless.

“God loves all his creatures”

“Ahh know but that’s not what ahh asked izzit?”

Eventually, backed into a corner he said “No. Cats don’t have a soul so they can’t go to Heaven”

I could hear TB stifling laughter in the living room.

I was determined to cook their goose so they’d never come back so I ploughed on.

“An anuvver fing. Elf’s. Youse lot don’t believe in Christmas do yer? So ‘ows elves supposed to get to ‘eaven? They work all their life making toys fer kids. They should bleedin’ get some reward”

TB isn’t even trying to hide her laughter at this point. These buggers are like limpets too – they aren’t going anywhere! It was time for the big guns.

“Well if they repent their sins…”

“Reap WHAT?? They ain’t done no sins. They just love. Thats what God’s all about innit? love?”

“Where does it say thou shalt not be Gay? It don’t. So can Gaaaays go to Jehovahs Witness ’eaven or not?”

I was actually getting really cross at this point so I knew I had to wind it up whether they were ready to stop playing or not.

“No. Never you mind any more of that “wellll” argy bargy – I wannit straight up”

There was a loud snort from TB – honestly, she has a cesspit for a mind that girl.

“Dooo Gaaaaays go to Jehovah Witness ‘eaven or not?”

“Whaaaat? Not even through the back door?”

TB completely lost the plot. There was a loud thud as she fell off the sofa and raucous, braying laughter – honestly, that girl laughs like a donkey in labor.

The Joeys gave me a look of absolute contempt and turned to leave. I was yelling “wait arh ain’t finished wiv mah questions” but they were gone.

And do you know, they’ve never gone back to her house?

20 thoughts on “Miss Manners (UN)Guide to Answering the Door”