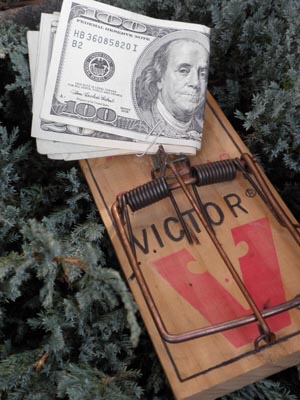 I had a problem with money disappearing out of my purse a couple of years ago. Ten bucks here, Twenty there, it was very annoying. Apart from the obvious ‘someone was stealing’ part, I’d go to look for cash and there wouldn’t be any. If anyone had asked for the money I’d have given it to them so this was really pissing me off because there was just no need for it.

I was guessing it was one or the other of the kids even though they vehemently denied it so I decided I’d find out by setting a trap. Literally.

I’d met a friend for lunch one Saturday and when I went to leave a tip I had no notes. I prefer to tip in cash so that was just the final straw. When I got home I set a mousetrap – those bloody things are HARD to mess with! – and put it in my handbag. I left my bag in the kitchen to make it nice and easy for the thief and promptly forgot about it.

A couple of hours later I was sitting watching telly when I heard an almighty roar from the kitchen and someone falling over. The cats all went flying so I rushed out to see what the heck was going on.

‘im indoors was just getting up from the floor, he’d obviously fallen over and he had a mousetrap on his fingers.

Imagine a big man, two hands on the floor to balance as he hoists himself up – and a mousetrap stuck to his fingers!

Well I started to laugh. I laughed so hard I think it was almost running down my leg! This infuriated him even more so he starts shouting “What kind of effin’ idiot puts a mousetrap in their bag? You could have broke somebodies fingers! Jesus H Christ are you an effin idiot?” And so on. Im literally helpless with laughter and the more I laughed the angrier he got. He put his “injured” hand under his other armpit for effect and I almost slid over laughing – the mousetrap was still attached to his hand!

Eventually I stopped bellowing and snorting long enough to point out if he hadn’t been STEALING because he was too lazy to go to an ATM then it wouldn’t have happened. Naturally it was all my fault regardless! I wish I had a picture of his face when I added “Oh by the way, you might want to take that mousetrap off your hand”!!

Needless to say, lessons WERE learned. He doesn’t even get my car keys out of my bag if he’s going to do something on my car without asking now though!