I thought of so many titles for this post. ‘Riding in Buggies with Bonnets’ was a favorite but I went with the above because it really is a synopsis of this tale!

A lot of people don’t realize that NY has a very large Amish community. They’re all over the state, from the Hudson Valley up into the Adirondacks, from the Southern Tier up to the Finger Lakes and all areas in between.

Unluckily for them there was a well established community by our old house. I got to know them very well over the years ‘im indoors and I were dating and even more so, after I moved to the US. They refer to all non Amish as ‘The English’ but it always really tickled me when I heard them call me ‘The REALLY English, English lady’!

We had a wood burning stove in our old house and used to buy several face cords of wood each winter. One of the men approached ‘im indoors one day asking would we be buying wood that coming fall. We said yes and they suggested we bought logs instead as it was cheaper. Joe offered to organize a woodcutting party if we supplied pizza! Yes those Amish have their weaknesses and boy do they love eating crap!

The first year we did this I arrived the day before the party so I didn’t have time to bake. They all rolled up at about 5pm ready to cut split and stack what turned out to be 15 face cords. I was amused seeing all the buggies and horses lined up along the drive – until I realized just how much… manure those horses produce. And me without a solitary rose bush!!

It was like watching a ballet. They were so synchronized it was incredible. The men were chopping and feeding the splitter and the kids were stacking it incredibly neatly.

It was getting darker and I was worrying they wouldn’t get it done in time when they all stopped as one – and switched on little battery lights in their hats!! It was so funny! They looked like bearded fireflies!

As well as the 6-8 guys we had the wives and kids so probably about 30 people in total, half of whom were under 14. We had ordered 15 giant pizzas and I got a load of chips, 6 dozen donuts and a lake of soda. I made some potato wedges as well. They set to and devoured everything. The only thing untouched was the diet soda! In the years that followed the numbers grew and I’d bake for 3-4 days beforehand , I’m sure they miss us horribly! 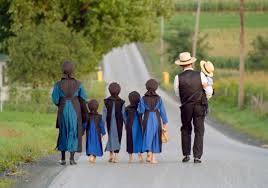 One of the things that started from that first night was my starting to take the women shopping. We’d go to the Mennonite stores, Aldi and Walmart and it was fun. I used to go about twice a week to take all the families in turn once a month. Nowadays I only take two families as I’m living 17 miles away so it’s not a commitment I can keep up more than that.

I have a bit of a potty mouth when driving. Especially if someone cuts me up. I used to be better at remembering they were there and just saying ‘oh gosh’ and THINKING bad words but – you know me!

I’d taken Fanny (real name – it’s not like they go online!!) shopping and we’d left Aldi coming up to a light where I wanted to turn right. As I’m about to turn the car beside me on the left swept across me to cut in front so I had to break really hard. I yelled “Póg mo thóin” at them and thought no more of it – for about three minutes.

Fanny piped up with “What was that you said?” Playing dumbo I asked what. She said that expression I’d used. I tried telling her ‘Cead Mile Failte’ (one hundred thousand welcomes) but she wasn’t having it. She said no it sounded like Pogue mah hone – so I told her it was “Bless You” in Irish. She sat there repeating it to herself all the way home. Call me a coward – I am – but I couldn’t face telling her she was saying ‘Kiss my Arse’ in Gaelic.

That was when she told me the Church Service was going to be at her house that weekend and she was going to wish everyone blessings in Irish.

So if a woman in a blue dress and a black bonnet tells you to kiss her arse – it wasn’t my fault!!

18 thoughts on “Up Thy Butterchurn! – Or When Pennsylvania Dutch Met a Touch of the Gaelic”